The developer is a long time surfer from Southern California, who has many years of computer experience.  He saw a need for a decent surfing video game, and set out to make some waves.  After fiddling around part time with mobile games, while simultaneously trying out some digital wave making concepts, the universes collided into a computer generated wave, that could be surfed, but was a close out, and was not functional on mobile.  After some time tweaking the waves and figuring out the system, a rideable wave efficient enough for a PC was developed, along with lots of foam.  With the extra latitude afforded by a PC game, the developer decided on an open world model with jet skis and land accessibility, because as in the real life a surfer, can not live (or play) based on surfing alone, and therefore, Search For Surf was developed into a 3D open world adventure game.  Later, controller support was added, and wave scoring, and contests to add even more interest to the game.  Now it has become a unique surfing game experience pushing the bounds of everyone’s computer who plays it.

The Endless Summer Search for Surf released on Steam on Friday September 5. The most anticipated surfing video game in a decade is now available to shred. The only two player, open world surfing game sets the standard for the next generation of surfing games.

You know its a great surfing game because its a surfing game made by surfers, which is why Bruce Brown Films the creator of the iconic surfing film The Endless Summer, is bringing this game to the surfing and gaming world.

Never before has a surfing game been created where the surfers can explore a tropical island chill vibe open world environment by land or by jet ski, discover new breaks, chat with surfers, and have an adventure like the surfers in the movie The Endless Summer did.

Of course, an adventure is even better when shared. That is why The Endless Summer Search For Surf is the first surfing video game to have a two player split screen option. Two players can explore, ride jet skis, and surf at the same time. Double the fun.

Surfers have been raving about the physics based surfing, and the authentic surfing feel the game has. Along with satisfying schwacks of the lip, realistic cutbacks, rad airs, and gnarly tube rides, never before offered features include duck diving, and takeoffs of consequence, along with a variety of boards to use that react differently in different wave conditions.

Of course its a video game and video games need action. So if you can’t hang with the soulful adventure surfer exploration aspect, then have a contest. Introducing the first ever two player surf contest, two surfers at the same time, with professional contest wave scoring. High score is based on a 10 point scale determined by speed, schwacks, airs, tube rides, and length of ride. Show your surfing skills and win the gold cup.

Experience the exhilaration, style, and freedom of surfing the way The Endless Summer iconic 60’s surfing film brought surfing to the world. Now you are the surfers, in this one or two player physics based surfing simulation. Progress through the increasingly difficult challenge levels to become a master at surfing all sorts of waves, and mix it up with different surfers and have two player contests on any level. The Endless Summer surfing games; what surfing games should be like.

The surfing is completely physics based, which means you need to use the waves to control your speed and do maneuvers. Quick turns give you speed while there is a stall button to slow. Hit a steep section with speed and do an air or slide the tail under the lip. Find a barreling wave and stall for a deep tube ride. Zoom in to the surfer point of view and you will taste the salt water in a realistic surfing simulation experience.

Test your surfing ability as a single player, by completing the challenge levels. Each break has a different wave and a different challenge. Shoot the pier, get air, race for speed, and get tubed. These are just a sample of the challenges you can complete. Levels increase in difficulty and can be completed in order or skip around and try different breaks.

Two player is where this game excels and is unique. No other game has been made where two players can surf at the same time, and although competition comes to mind, it is also cooperation that game play leads to. Surfing games are skills games. Which means players get better as they play. This facilitates teaching. Where a good player wants to get the worse player up to speed, so they can compete at the same level. Competition is healthy and enjoyable, but only when competitors are of similar ability. The mechanics of two player consist of a single camera that zooms to the standing surfer when one is riding and zooms out to show both players if none are standing. Each player gets scored for the waves they catch, and the same scoring system for single player is used. Contests are customized by length of contest and number of wave scores that count. For example if two scores are selected, as is the case in a pro contest, then only the two best scored waves within the time limit are added for the final score count. If a wave is caught before the time ends it counts. 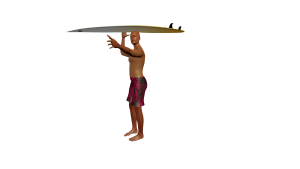 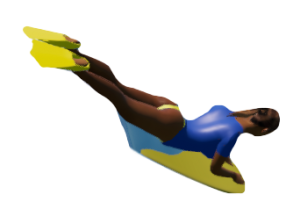 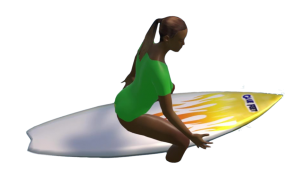 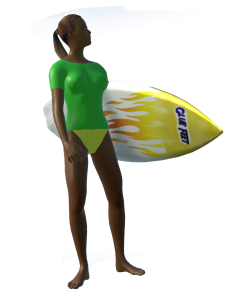 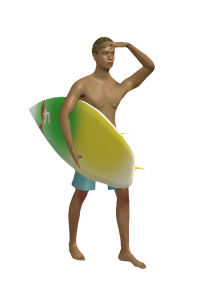 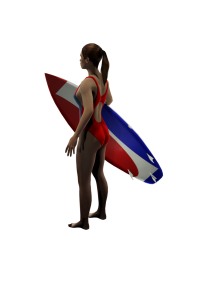 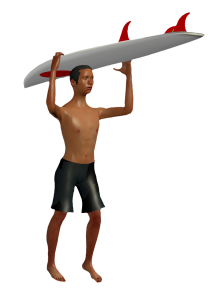